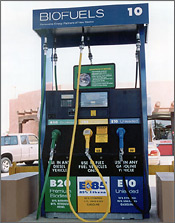 Alternative fuels are derived from sources other than petroleum. Most are produced domestically, reducing our dependence on imported oil, and some are derived from renewable sources. Often, they produce less pollution than gasoline or diesel.

Ethanol is produced domestically from corn and other crops. It produces less greenhouse gas (GHG) emissions than gasoline or diesel.

Electricity is produced domestically from a variety of sources such as coal, natural gas, nuclear power, and renewables. Powering vehicles with electricity causes no tailpipe emissions, but generating electricity can produce pollutants and greenhouse gases.

Natural gas is a fossil fuel that is plentiful in the U.S. It produces less air pollutants and GHGs than gasoline.

Hydrogen can be produced domestically from fossil fuels (such as coal), nuclear power, or renewable resources, such as hydropower. Fuel cell vehicles powered by pure hydrogen emit no harmful air pollutants.

The Federal Highway Administration (FHWA) recently announced the designation of the nation’s first alternative fuel corridors for electric, hydrogen, natural gas, and propane vehicles. With this designation, FHWA is facilitating the creation and expansion of a national network of alternative fueling and charging infrastructure along national highway system corridors. This is the next step in advancing America's 21st century transportation network. For more information on these corridors, including maps and additional resources, please visit the FHWA website at:
http://www.fhwa.dot.gov/environment/alternative_fuel_corridors.